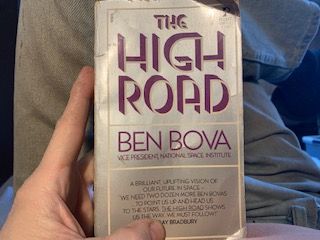 40 years ago award winning Science Fiction author and visionary Ben Bova nailed the source of what stalled the progress of mankind into space and denied us a clean and viable solution to the energy problem.

This is the focus of his book: The High Road which published in the early 1980s to promotes the sourcing of materials and energy from space and does a very good job detailing the technology of solar power satellites advanced by Gerard K. O’Neill and the L5 Society. He also compares these to other competing energy policy visions involving nuclear fission, fusion and fossil fuels including a way to burn coal more cleanly called MHD—Magneto Hydrodynamic—which allows for capture of useful products from the waste stream. Bova also spins some alternate future scenarios of how the world would look in the Year 2000; based on the various alternatives and policies of government—some of which missed the mark (fortunately!) but a few look disturbingly prophetic for the world of the 2020 Decade.

I really loved Bova back in the day. He was—I’m guessing center left in his politics and obviously a “Promethean”; a term that he introduced to my vocabulary along with “Luddite” (which I knew a little before from history about the industrial revolution and it was the name of the group of weavers who were smashing the machines with sledge hammers led by the infamous Ned Ludd). The two are opposites in regard to technology.

Bova defined a Promethean as someone who is a champion of technological progress after the character Prometheus from Greek mythology who stole fire from the gods to jump-start human civilization; whereas a Luddite is someone opposed to progress and looking to uphold the status quo by fixing things in place in the here and now—or turn the clock backward and return society to the ways of a simpler past age. Both variants of the latter are always a hindrance standing in the way of improvements and even dangerous because they they are holding things back that are necessary to keep up with or outgrow our most pressing problems—like energy production to meet the needs of billions of people and new inventions to increase efficiency or substitutions of new materials to compensate for resource depletion. 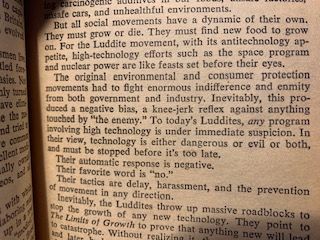 From the pages of the old paperback version I picked up back in my college days and came across again recently:

“To today’s Luddites, any program involving high technology is under immediate suspicion. In their view, technology is either dangerous or evil or both, and must be stopped before it’s too late.
Their automatic response is negative.
Their favorite word is “No”.
Their tactics are delay, harassment, and prevention of movement in any direction”.

Thanks to the likes of those kind of people not only has the colonization of space been delayed for 40 some going on 50 years—our infrastructure is falling apart and affordable housing and energy and many other things we could have are denied because a polyglot of activists, politicians and civil servants have tied up so many things with fear mongering obstructionism and bureaucratic red tape that it takes forever to get any power plant or infrastructure improvement project off the ground and up and running.

A good example so many years later since the time this book was published; is the construction of the Empire State Building which went up in little over a year vs the many years it took to raise the 9/11 Memorial on the site of the fallen Twin Towers. The years of stakeholders fighting over this and that and the other along with environmental impact studies that sound like a joke in the midst of one of the most heavily built up places on Earth. Anything to find excuses and waste time and money and for people who don’t even own the property to dictate how things are done.

They should have just sought the input of the survivors and family members to plan and go forward to build and all those politicians and parasitic outside interests be damned.

All this NIMBYism and bureaucratic sclerosis is slowly killing our civilization and if we were to discover an incoming asteroid a few years out—we’re surely doomed.

Sometimes I swear—those environmentalists who hate progress and prosperity so much must have a Jonestown death cult wish and would rather see humanity perish from that or a nuclear war than for our descendants to reach the stars. 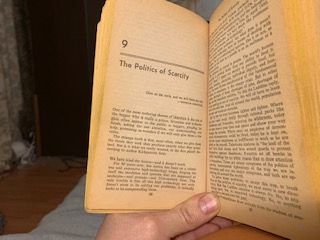 After hearing the Idiot Child with a Machine Gun argument put forth by Paul R. Ehrlich of “The Population Bomb” fame; it became obvious that the Stasis and Rationing crowd shifted to this rationale when their Limits to Growth arguments were debunked and rejected in the Reagan era. Ben Bova also introduced me to the term “Politics of Scarcity”.

Look who he quoted for this chapter! Sadly there seems to be no more Churchills or JFKs anymore. With that kind of leadership, the federal government might have conquered space but now it’s no longer interested in carrying forward such lofty goals. We can only hope it is equally inept when—at the behest of the luddite activists and ideologues who’ve wormed their way into the bureaucracy—it tries to stop giants in the private sector like Elon Musk and Jeff Bezos from doing it.

“Build Back Better”: more like Build Back BS is hardly a Promethean vision and it’s more likely just a rehash of wasteful government spending where most of the money will go into the pockets of politicians and crony contractors just like every other infrastructure improvement allocation in our lifetime. The money goes somewhere else and the bridges and levies don’t get repaired and then fail like the bridge collapse that made the news locally last week—or fiasco when Hurricane Katrina hit New Orleans. 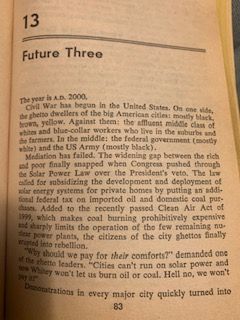 Here is the interlude called “Future Three” in which the author spins the scenario that looks hauntingly similar to the Biden Administration’s ongoing attempt to implement the Green New Deal where at the end of the 20th Century Congress passes a law restricting coal and nuclear power and subsidizes solar panels for private homes. And there’s a twist that might not make sense anymore but did back in the day when black people used to be hostile to the environmental movement on grounds of being aware or “woke” to the fact that restrictions on economic development for the sake of protecting the ecology puts a heavy burden on those who are still poor. I can dig up an actual quote by a prominent Civil Rights activist from that time who also voiced a complaint like this one from a leader of a ghetto uprising in Bova’s brief storyline:

“Why should we pay for their comforts? …… Cities can’t run on solar power and now Whitey won’t let us burn oil or coal. Hell no we won’t pay it”!

It’s a far cry from “Don’t frack me I’ll frack you up”! and the demonizing of anyone opposed to green policies as a “white supremacist”. So amazing in this time how the left has managed to hoodwink the people of the inner cities into throwing away their own best hope for economic uplift and revival. Much like what they did to the whole country several decades previously by cultivating the irrational fear of nuclear power. It may come down to a big wake up call to make everyone realize we all ought to be protesting along the lines of the guy from “Future Three”.

1) He was a great SF writer of the late 20th Century has several novels which I’ve also read and highly recommend. My favorite of those was “Privateers” with the space entrepreneur Dan Randolph who is in a pissing contest with the Soviet Union which dominates the UN and is systematically squeezing the last vestiges of capitalism on the High Frontier. Which has a few good sequels in which references to events in the the timeline of the original novel are abridged because of the ending of the Cold War and dissolution of the USSR.

I also have his “Notes to a Science Fiction Writer” which is a guide book for writing your own novel. Which I need to find and dust off.

There is a similar paradigm with the push to convert the entire economy to solar without much thought given to reliability of this technology in climates with cold winters where sunlight is often unreliable for days on end. This reality is obvious every time I click to bypass one of those annoying infomercial ads at the beginning of many a YouTube video.

While my outdoor wood furnace struggles and the backup oil reserve dwindles; could a rooftop covered with solar panels and a backup Tesla Power Wall keep up with the demand of an electric heater under such conditions?

3) Sad one: Ben Bova died in late 2020 in his elderly years. He contributed greatly to the literature of Science Fiction and a real world vision to promote the expansion of human civilization into space as the alternative to dying with a bang or a whimper. He will be missed by many.

* If you can find a copy of the book online, or in a used bookstore or public library it is well worth the read.

And here and now in the Year 2022 it’s namesake remains a Road worth taking!