Gloria Álvarez: A Ray of Hope from Guatemala 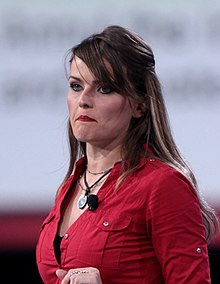 Afew weeks ago despairing in the depths of the Coldpocalypse my furnace struggled and could not keep up with the setting of 68 degrees on my living room thermostat.

So depressed and miserable I was lingering under the covers all morning listening to Tube. Discovered Gloria Álvarez who is like a beacon of light from Guatemala Where they actually have a libertarian university. Found her via a John Stossel video and noticed her amazing philosophical deepness and understanding of the human condition. She has the problem with social inertia in Latin America pretty much nailed—which is also a serious problem in the United States and everywhere else in the world. It’s why there is this pendulum between left and right wing politics that swings back and forth over time as people become fatigued by the excesses of one extreme or the other.

Here is a link to what might be the best video: https://m.youtube.com/watch?v=cd4rlZ1Npeg

Álvarez reveals a major influence early in life to be elders who were refugees from communism. A Hungarian grandfather and a father from Castro’s Cuba helped inoculate her against Marxist influences while studying abroad in Europe. She also studied at Francisco Marroqu University in Guatemala City—a privately funded institution that champions the Austrian school of economics. https://en.m.wikipedia.org/wiki/Universidad_Francisco_Marroqu%C3%ADn

UFM has an unusual mission statement for an institution of higher learning: “To teach and disseminate the ethical , legal and overall economic principles of a society of free and responsible persons. And stresses the need of universities to stand apart from the conflicts of the time for the sake of preserving science and academic freedom. A breath of fresh air from both academia and Latin America where too often orthodoxy and cultural stagnation are the rule. In the interview linked above Alvarez is questioned about the paradox of why this fledgling bastion of freedom rises in a poor country like Guatemala—where as other nations in Latin America like Cuba or Venezuela that achieved affluence and then fell into socialist tyranny.

Alvarez says it has much to with generations of people who come to take prosperity for granted and fail to appreciate the hard work and individual achievements that go into building a national economy. Many of us who are students of history or political science also know this phenomenon as the Resource Curse and it’s a big problem in the US as well. Your typical Bernie Sanders supporter / ANTIFA or BLM protester—have probably never experienced the level of poverty hallmark of many developing nations. Or the starvation level hunger that touched off the French Revolution. Since the start of the violent protests following the death of George Floyd I can’t help but wonder with ongoing supply chain issues and inflation—what happens if such does come to America? It’s a very worrisome thought.

Speaking of revolutions, intellectual thought in Latin America according to Alverez is more heavily influenced by continental Europe (Hegel and Marx) as opposed to the philosophy in the Anglo Sphere which is based in the 18th Century enlightenment (John Lock and the authors of the Declaration of Independence). Hence the appeal of Karl Marx and socialist or communist ideology in Latin countries. Unfortunately in modern times intellectuals of the US have also studied in Europe and became the Marxist professors that are indoctrinating many of our youth. In Latin America, Alvarez cites that what passes for conservative thought is more often based on oligarchy; an aristocratic tradition that like the left wing of politics is also continental in nature. At least in the US conservatism has a heart and soul based in libertarianism. Somewhat. It sounds somewhat familiar when Ms Alvarez talks about how after years of misery and failure that people get fed up with socialist regimes and turn to right wing populism for a while. Or watered down versions of socialism. Indeed all the opposition parties in Venezuela are more or less socialism light. And I’ve noted that in many other Latin countries like Mexico and Brazil. Or conservative parties in Western Europe and many dissidents in the former Soviet Union as well.

Gloria Álvarez is hopeful that in time it may be possible to break the vicious cycle of the political pendulum. In addition to being a libertarian commentator with her own radio show , she has authored a few books “How to Talk to a Progressive” , “How to Talk to a Conservative” and “The Populist Deception”. From what I’ve heard from her on various YouTube interviews—those would be very interesting to read and write reviews on. However I might have to brush up on my Spanish a great deal—unless English language editions are available.

I will be following the news on this girl because she is definitely a champion of both Liberty and Reason. And also the philosophy of Ayn Rand!

Too bad we can’t vote for you!