As The World Burns: Discovering The Virtue of Selfishness in Energy Independence and Foreign Policy

It’s been a manic week between the malaise of a nation in self inflicted decline, growing international crisis and uplifting discoveries and hope in my own life as I continue to plod along with the effort to maintain and enhance my own existence and personal explorations to make sense and find greater meaning.

Trying to get refocused on my projects and overcome the malaise that has been demotivating me.
More thanks to Gloria Álvarez who I discovered by way of John Stossel and in turn got me interested in the Atlas Society which hosted her in a few interviews and discussion groups. Who would have imagined this girl; a spitfire fury from Guatemala embracing the 3 Cardinal Rights of free societies: Life, Liberty, the Pursuit of Happiness, and the philosophy of another spitfire fury from Russia: the late Ayn Rand! That may be just enough hope to get me through this.

Another cause for hope was from Canada. The Stalinist Trudeau is backing down on his fraudulent state of emergency. It looks like the truckers may have won. The conservatives in the parliament better go for the jugular on this because such a heinous abuse of emergency powers in a traditionally free nation must not go unpunished. I think the Canadians actually have the option of pushing for a vote of no confidence where he can be ousted and replaced. And let it be a warning to the “Career Politician in Chief” or career parasite in the White House, who really ought to be impeached for his gross unfitness for the office and energy policies that are putting America and its allies in great existential danger on top of unnecessary hardship to their peoples.

As if the Covid pandemic and it’s bad side effects were not punishment enough.

Of course the real elephant in the room this week was the Russian invasion of Ukraine and rumblings of “World War 3” at which the powers that be in some political circles in our country are surely salivating the prospect of an unbridled orgy of indulgence in more emergency powers. It’s a great way to escape accountability for the mess they’ve made and a convenient distraction to override the growing discontent of the American People whose patience is wearing thin from dealing with Covid and bad energy policies. What better than total war to take all those issues off the table and make a case for even greater demands for personal sacrifice and restrictions on civil liberties. 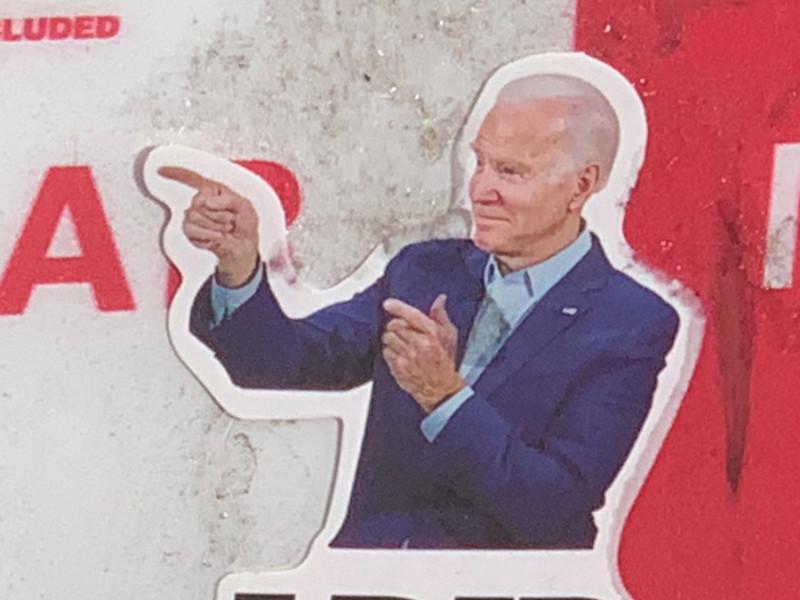 “Pull my finger. I double hog dare you”.

The “You’re going to feel this” remark from President Poopy Drawers from Disasterville earlier this week was like rubbing salt into an open wound for anyone yearning for an end to crisis and return to normalcy.

The obvious solution is to reverse the decision on Keystone and go balls to the wall with domestic energy production and give economic relief to Americans being financially bled by the bogus Green New Deal and end dependence of Western Europe on natural gas from Russia. That probably won’t happen—unless the Democrats finally come to their senses like FDR did when he dumped the original New Deal at the beginning of World War 2. Or Republicans claim a supermajority in the legislature this November. They could then theoretically order the restoration of work on the Keystone Pipeline and reverse other harmful Biden energy policies by Act of Congress (which is within their constitutional authority and responsibility) and override a presidential veto. I would enjoy seeing that happen but I’m not holding my breath.

The other option is to shrug. As in the Atlas Shrugged novel of Ayn Rand fame. I’m not in that good of a position to do that—and even if I were in the way of maybe going off grid and achieving a totally self sufficient rural lifestyle—I’m surrounded by people who would not be and too close to densely populated urban areas that will inundate me with a flood of refugees in the event those are rendered uninhabitable by the total collapse of infrastructure or abandoned for fear of nuclear strikes. I’ve more or less cast my lot with fighting for the preservation of civilization and the freedom it makes possible. Or I should say the freedom that makes civilization possible because of a chronic disregard for freedom is why our nation and as a consequence; the rest of the world is falling into such dire straits.

And then Biden who took a wrecking ball to American energy independence a year ago has the audacity to tell us we are going to feel it. Which smells of sadomasochistic anti capitalist sentiment and anti individualism even worse than Obama saying that our electric rates must unnecessarily skyrocket for the good of the planet. Because we are in a time of great existential danger we must sacrifice our personal happiness for the greater good and now we are actually standing at the precipice of a real crisis and the case for lock step conformity looks so compelling.

To hell with that! Like the baby daddy said to Kirstie Alley near the end of the classic Look Who’s Talking movie of the early 1990s: “I’m Having a Selfish Phase”. As in Ayn Rand’s “Virtue of Selfishness”. If I must melt down I might as well double down on the sacrilege against the evil that is altruism—and it was Rand who introduced this concept in her book by that name. She lambasted the ideal of self sacrifice as a virtue that is promoted by most religions and way too many politicians. The opposite of altruism is a rational self interest or egoism; a far better thing to embrace than sacrifice for its own sake or allowing others to sell you self harm or suicide as a virtue.

Selfishness—(which in the context of Rand’s philosophy means rational self-interest)-as a virtue is morally superior to compulsory service or unnecessary austerity in the name of a greater good that is in reality the good of our so called betters who’ve through gross incompetence and even malicious intent have brought the world to the brink of ruin. Maybe even oblivion. These people are in some ways far worse than Vladimir Putin. At least his naked aggression in Ukraine is open and blatantly evil for the world to see. It’s a lot harder to see this in the leadership of the U.S. and the western allies who’ve greased the skids for this crisis through their sheer stupidity. What the hell was Biden thinking—or not thinking—when he canceled Keystone? Or the foolish Germans for that matter when they decided to abandon fossil fuels and nuclear power and became dependent on the Nordstream gas pipeline from Russia?

In a way they are getting what they deserve. However the rest of us who just want to get back to normalcy and do their own thing have to suffer collateral damage. I have decided that while I may end up feeling it—I don’t have to like it and I’m certainly not going to embrace it as a virtue. I like my way of life and don’t want to give it up because someone else thinks the way I live is sinful. I’d rather go on living in sin and damn them all. They can take their Green New Deal and the actual wartime economy they are looking to default to and shove it. I say no to world war. Putin can have Ukraine and all the trouble that goes with occupying it and dealing with the insurgents, his troops coming home in body bags, the financial bleed and becoming an international pariah along with the leaders of China should they decide the time is now ripe to grab Taiwan.

With the latter such a move makes for the Golden excuse to tell Beijing that the free ride is over and resume the Trump trade policies on steroids. It might be a bitter pill to swallow but better than total world war that could escalate to full blown nuclear confrontation. During the Cold War we applauded the valiant action of the Hungarians as the Red Army crushed their revolution in 1957 like the Russian forces pouring into Ukraine Friday night. We cared about the Hungarians. Yet we also had to weigh the good of another people against our own and the world as a whole when it came to the prospect of global thermonuclear war.

The Virtue of Selfishness in the way of strategic and tactical military doctrine is essentially an America First policy. Too long we’ve conducted an interventionist foreign policy that often goes blatantly out of its way to sacrifice American blood and treasure for various vaguely defined altruistic goals. It’s almost strait out of the pages of Ayn Rand—in which she talks about how in environmental extremism that anything of value to humanity must be sacrificed for the non-human. Plants. Animals. The ecology. The planet. That’s our energy policy in a nutshell being implemented for reasons other than saving a planet that are also not rational.

When it comes to current U.S. foreign policy it’s obvious that anything of value to the United States of America must be sacrificed to the non-American. We must engage in wars for altruistic purposes but not our own rational, national self interest. Our troops must practice courageous restraint and sacrifice their lives to dumb rules of engagement policing the streets of occupied nations while we pump in billions of dollars of infrastructure improvements while letting our own roads and bridges fall apart at home. And we certainly can’t adopt an isolationist posture or peace through strength posture in which we rely on separation by oceans which enemies must cross to reach our shores and enforcement of the Monroe Doctrine which was originally intended to keep European powers from interfering in the affairs of other nations in this hemisphere back in the late 19th Century.

A major fail on America’s part was to allow Cuba less than a hundred miles from our shores to fall to communism in the 1960s while drafting our young men to die in vain half a world away in the jungles of Vietnam.

I don’t propose abandoning our allies. Just the foolish, self immolating policies both foreign and domestic that have brought us to this point in History. Putin may take Ukraine—but he can’t realistically take the whole world, let alone Europe anymore than Napoleon or Hitler could take Russia. Even with China’s help. The Revisionist Powers can be contained if the western nations throw off the yoke of self harming policies based on altruism that are making them weak and vulnerable to the forces of nature and tempting the ambitions of other national leaders who are not only rationally self interested but also rationally evil and not given to such foolishness. And they must do it quickly to lessen the hardship of their own citizens and facilitate the recovery of their economies which are the bedrock of both prosperity and security and ultimately freedom.

With access to secure energy reserves, the West can save itself and hold the line. Lower world energy prices will ease the burden on America and other free nations while hittinr Russia in the pocketbook. Putin will realize the folly of basing an economy on one major commodity and maybe the necessity of diversifying and setting his people free to do their own thing as was their expressed will in the ending of the Soviet Union.

If not—he will eventually be overthrown.

The birth pangs of that may already be happening in Russia as the protests I hear are mounting.

It is after all the native land of Ayn Rand and from what I’ve seen through the years on YouTube there are lots of Russians who like me believe in the Virtue of Selfishness and just want to be free to do their own thing.