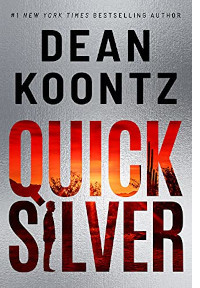 Dean Koontz is one of those few living writers (an increasingly small list of fine folks, sad to say) who’s books I eagerly look forward to reading hot off the presses. Since I was a kidlette, reading his saddle long out of print—but kindasorta revisited in Mr. Murder—classic AntiMan,I’ve been a fan, finding myself frequently giddy at the prospect of reading new words from this fella who has gained my respect year after year, story after story, character after character. He’s one of those folks who, when I’m talking to people who might not be the obsessive readers that I am, I recommend without hesitation. It was with these high hopes and an addicts need for new intense adventures that I cracked open my copy of his most recent novel, Quicksilver.

Suffice it to say, that if you’re a Koontz reader, and have expectations in mind, that you won’t be let down with this new outing. While not his best book—that, I’d argue, is a three-way tie between Phantoms, Ticktock, and From the Corner of His Eye—it is nevertheless the best recent publication that I’ve read this year. There’s action, and adventure, and romance; menace, and terror, thrills. Yet, above all, there’s something equally important: a likable cast.

When it all boils down, I think that’s one of the biggest reasons that I keep coming back to Koontz: his stories are peopled with heroes that you can get invested in, and villains that you desperately want to see get their comeuppance. He doesn’t write like many of his contemporaries (King comes to mind) who give us assholes, and expect us to care. He gives us basically decent, moral protagonists, ordinary folks put into extraordinary circumstances, doing their best to get by, while keeping their souls intact. What’s not to get behind, right?

In the case of this book, we have a core four character cast, headlined by the titular Quinn Quicksilver who, without giving too  much away, finds himself with a series of awakening powers. Along for the ride—in this case a literal ride—are his inevitable lady live, Bridgette, who like Quinn is possessed of inhuman—or maybe extrahuman  would be a better word—abilities; her grandfather, Sparky; a gifted seer, whose name escapes me at the moment (sorry); and because it’s a Dean Koontz book, the inevitable canine companion. They’re each of them nice, decent, brave folks, set off on a series of bizarre circumstances beyond their control, and doing the best that they can.

Against them are the kind of villains that I’ve also come to expect. The overreaching, fascist government agency; the alien creatures that feed on human suffering; and the final villains of the piece, the untouchable elites, despicable in every sense of the word, and all to within the world we live in, rather than an exaggeration thereof. Koontz’s villains are always high points of his novels, from the Ancient Enemy of Phantoms , to the various terrors faced by his series character Odd Thomas. He doesn’t let me down here. The bad guys are Evil, in the big ‘E’ sense of the word, and not just anti-heroes that you could almost get behind. Nope, they’re bad, pure and simple, and when they get what’s coming to them, you cheer.

For those long readers of Koontz, there’s a lot here to notice that newer readers will miss. Their are countless mentions of Psychic Magnetism, a concept used to logical extremes in the aforementioned Odd Thomas books and others. The otherworldly villains feel like the kissing cousins of the monsters of other books, including the world destroying robots   of Elsewhere, Edgler Less of the classic Intensity, or the various federal federal monstrosities that live in every shadow of the world that Koontz’s characters travel through.

For many books now, since Fear Nothing, the first Christopher Snow adventure, and the first of Koontz’s books that I picked up new in hardcover rather than waiting for the cheeper paperback, there’s been a feeling that he’s been building up to some grand throw down between good and Evil, with small puzzle pieces being placed with each succeeding volume. Reading through some of his older novels, I’m constantly astounded as to the parts added decades ago, in thrillers like Midnight, and Watchers. Quicksilver is no different. While the book stands firmly on its own, there’s still the sense that we’re seeing only a small part of the greater whole. That when he does (and I hope to God that he does) finally write his grand climactic opus, that the whole will be larger than the  sum of the parts, and not a frail aftereffect thereof.

In short, I suppose you could fairly say that I enjoyed the book, as much as some, and more than many. It’s another addition to a library of tall tales by a writer whose work grows with the telling.