Physics! Physics! Physics! If I was better at math I’d have become a physicist. But I wasn’t so I didn’t. So what did I become instead? Well, it’s confusing and complicated and I’m not sure anyway. Besides, isn’t life a process of becoming? Yes, it is, so it just goes on and on. We become what we are and then go on to become something else, and so on and so forth. Nietzsche subtitled his book Ecce Homo, “How One Becomes What One Is” which is a pretty good subtitle for a biographical work.

And in today’s News of the Weird, we find: Maths curriculum at Durham University to be ’decolonised’: New guide urges academics to make the subject ’more inclusive’ and to consider the ’cultural origins’ of concepts they teach, by Kaya Terry. The purpose of this is to stop using “white or male” mathematicians because … because … I dono.

Which brings me to Religion Is Moronic, by Todd Seavey (author of Libertarianism for Beginners). Which is subtitled “But then, it’s wrong to hold any belief without evidence”, which is true and rational but not typical of Your Average Person. Or “The Celebrated Man In The Street” a.k.a. “T.C. Mits”, as Lillian Rosanoff Lieber described her/him/them in her excellent book The Education of T.C. Mits. But the actual problem isn’t so much that religion itself can be moronic if yer not careful, but the so very many people who think they’re religions but aren’t that are.

Getting back to physics, we find Study sheds new light on the origin of civilization, by Sheila Kiggins. The study finds that growing roots and tubers doesn’t lead to hierarchical “civilization”, whereas growing cereal crops does. Well, now, just because it is hierarchical doesn’t mean it’s civilized. In fact the biggest problem we have and have had is that hierarchy limits and crushes civilization. So now what? Another take on it is Tax Brakes: Scientists Find Taxes Only Happened When Mankind Took To Growing Cereal Crops, by Anamarija Brnjarchevska. Taxes = Civilization? No.

And what about Einstein’s Spooky Action at a Distance Becomes even Spookier: Quantum Physicists Create a New Universe, by The Daily Galaxy. And what about New mathematical framework pioneers a theory of stability of interacting systems, by Lancaster University. After all Scientists Think That Dark Matter Is From A Different Dimension, by Nathan Kamal, takes us where?

Not to mention The fourth industrial revolution & the great reset: programming people like CBDCs with digital ID, by Tim Hinchliffe. They’re trying to control us again. If only we weren’t so deplorable!

Free Speech for Me but Not for Thee, by David French. It is truly amazing how afraid of uncontrolled speaking and thinking the “Powers that Be” are. “Republicans, Democrats, Baby-rapers, what’s the difference?”

And as far as the “Antikythera Mechanism” goes, First Computer: 2,000-Year-Old Device Found On Seabed Maybe Designed By Archimedes Says Expert, by Martin M Barillas, and Researchers home in on possible “day zero” for Antikythera mechanism, by Jennifer Ouellette. All I can say is “Golly!”

Another use for AI: ’Robot scientist’ Eve finds that less than one-third of scientific results are reproducible, by University of Cambridge. Finally doing something about the reproducability crisis.

When I was young (a very long time ago), people talked about the “conservative-liberal pendulum”. Well, folks, it’s swinging faster and faster: Do Democrats really understand why that red wave is coming?, by Bernard Goldberg. Eventuall that pendulum is just gonna hang there in the middle, quivering. Perhaps this is a good thing.

And the most likely reason for all the Elon Musk Twitter noise: Gatekeepers Very Afraid That Elon Musk Will Remove the Gates From Twitter, by Matt Welch. Both the “left” and the “right” seem to think that old “free speech” thing is terrifying. When them guys get terrified, it would be funnier if it wasn’t so scary—we never know what they’re going to do in their panic.

And to go out on our mathematical theme: 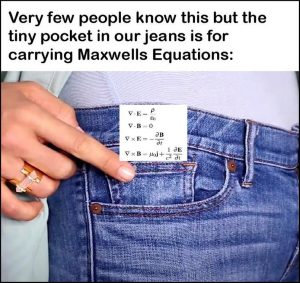 Everybody should carry Maxwell’s Eqauations, right?

And lets us pause for now with this thought: 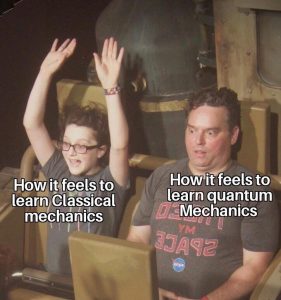