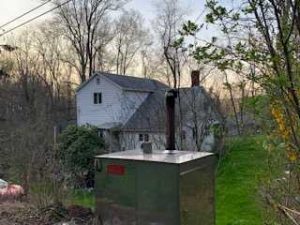 My birthday on Earth Day 2022 came and went yesterday with not much fanfare—other than some well wishing texts from friends and a phone call from an old best friend that I had to cut short because I was working. Yes, they messed up with my schedule because we are supposed to get birthdays off and it probably would not have been too much trouble to have let me start my first vacation week a day early in on Friday instead of today—Saturday which so happened to the the date of my annual 2 hour tech competency class which I usually schedule for vacation week anyway. It should have been the start of a really terrific vacation with the weather finally turning to summer like conditions for the next three days with highs in the 80s after a rather icky April that at times as recent as this week were more like March or even February. 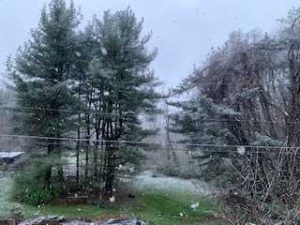 After this nasty bout of snow squalls and freezing nights there is finally light at the end of the tunnel where I can soon rely on the natural thermal balance of the house like I’m already doing with the greenhouse and not have to run any furnaces for the next several months. There was also my plans to write a decent supplemental edition of the Diaries and visit Uncle Budd at the care facility in tye afternoon—in addition to shopping for stuff for an ongoing project—the 150 gallon aquarium and stand that I’m getting close to the ultimate test on. However I got a little under the weather today after the class and did not feel like doing much of anything until evening when I ventured up to the pond to run the waterfalls and take some pictures of the mid spring flowers. And then trek to the greenhouse to check that out. And here I am again trying to throw something together at the last minute which I am trying not to do anymore.

I pulled the plug on the blower of the outside furnace yesterday to let it just burn down and keep it from overheating and keep the house warm tapping the boiler heat. It worked well and I added a little more wood last night before plugging it in again because the wood was mostly gone. And added those remaining non yellow milk jugs to get rid of along with the bathroom trash. Plan is to just let it go from here until it burns down to nothing and continued tapping boiler heat.

Was headed for 80 today and even made it a little higher and 80s next two so I’m going to put aside a few logs and kindling wood in the basement to keep dry for a good restart after chilly weather returns mid week. Then I’m hoping I won’t have to do it much longer. I should be able to get over the remaining hump with what I’ve got left and supplement if necessary with deadwood from the property. 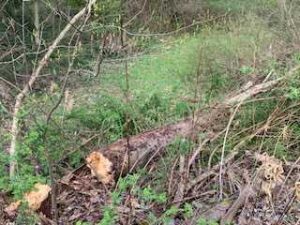 I just got a significant windfall—literally! The old ash tree that was killed by the emerald boring beetles finally toppled saving me the trouble of having to fell it myself—which I’ve been reluctant to do because of the risk of it going the wrong way and hitting the patio awning and house. I got lucky on this one. Discovered this on my way back in late morning.

Tech class went well. Was disappointed that after finally mastering the interpretation of AV blocks to the point of great confidence—1st Degree, Mobitz 1 & 2 and 3rd Degree—none of those were on the test. Just the easier normal sinus, sinus tachycardia, A-Fib and ventricular tachycardia & Fib, atrial flutter, Tosades (near death) asystole (flatline / dead). Those are easy on the competency test though not so much on the EKGs I do and the monitors in the ER.

It was a rough morning having to get up so early for a morning class and finally it’s over for another year.

Crashed when I got back in again and was feeling kind of under the weather when I got up. Hope I’m not coming down with something or gave it to anyone else there or at work yesterday. I felt fine then and just assumed I was just having sinus issues when I got up this morning—plus I ate a bunch of junk—sardines and Oreos last night when I got home and a pop tart this morning and I often feel crappy when I eat a lot of sweets. I should have checked my own sugar when we did the competency on the glucometers this morning.

Was 99.9 earlier. Now down two degrees and I’m feeling better. This might be another false alarm like before so I’m going to see if it goes away on its own overnight and decide what to do in the morning. And just putter around the place today. Was thinking about shopping for pipe fittings and other things and trying to see Uncle Budd but that latter thing I’ll wait until Monday and do it when I go out for my Honda appointment. If I go. If symptoms persist or I get sicker I’ll have to cancel that too and get tested again.

At least I don’t have to call off work and the weather is milder so nobody will freeze to death or I can’t keep up with the furnace when it gets colder again.

When I was feeling better around 5PM I made it up to the pond to enjoy the evening and take a few nice pictures of the area and the plants and maybe I can share those in a postscript as time is running short. Or in the more extended version I’m working on.

And I regret I don’t have time for a major editorial. I had some good taking points about Biden energy policies which are hypocrisy to the max and I wanted to say something about some of Al Gore’s $30 & $20 thousand dollar utility bills. That’s even worse than Harrison Ford taking a spin up the California coast in a private aircraft for a cheeseburger like I might go to the DQ in the next town for an Oreo Blizzard!

And I’m the one who is supposed to sacrifice for the the sake of the planet?

Oh well. Maybe in a future B-Erf Day Special. Or it might be good to articulate these things in an article about Gerard K. O’Neill and the High Frontier I’ve been dying to write. Earth Day would have been a good time for that because sourcing solar generated electricity from panels on geosynchronous orbit and directing future expansion of human populations to artificial habitats in free space is a Real Green New Deal whereas the current Biden plan and the plans of AOC and others will repeat the ecological disasterville of the former Soviet Union on a global scale while Al Gore who has a net worth of $300 million and China laugh all the way to the bank.

As evening gives way to night I am feeling better and my temperature is dropping back to normal. So I probably don’t have that latest Omicron variant that sounds like a software update for Windows. Just like the last several times it seems to be fading fast. I expect it to be gone by morning.

And I’ll be good to pick up where I left off.

Earth Hour is actually in March and not concurrent with Earth Day as I assumed when I sent a letter to the editor the previous night lamenting my inability to do a counter protest by turning all my lights on because I prefer making America great again instead of making it like North Korea. Also it’s more environmentally friendly to burn light bulbs than candles which actually have a bigger carbon footprint because of their process of manufacturing—like most primitive low tech solutions. And don’t get me started on the process of turning corn into Ethanol to add to gasoline.