It seems that Lindsey Graham, the “senior” Republican U.S. Senator from South Carolina, is getting his just rewards for supporting “common sense gun safety” legislation, namely “an agreement on principle for gun safety legislation Sunday, which includes ‘needed mental health resources, improves school safety and support for students, and helps ensure dangerous criminals and those who are adjudicated as mentally ill can’t purchase weapons.'” 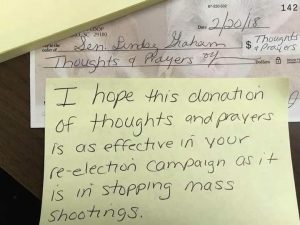 You see, instead of congratulating Graham for “moving to the center” and “meeting them halfway,” the hoplophobes and victim disarmers are pissed at him for only giving them half a loaf, instead of the whole loaf and then some, such as outlawing civilian ownership of “assault weapons” such as AR-15-, M4- and AK-47-pattern rifles, and legalizing third-party litigation against gun manufacturers and retailers

So while Graham may get some accolades from the Necrotic Republican Association National Rifle Association for his pro-gun-when-it’s-convenient rhetoric, I suspect that he won’t get much traction with the rest of the right-to-own-and-carry-weapons crowd [GOA, FPC, etc.].

Ain’t that a cryin’ shame, now?

As they say in the South, “Bless your heart, Lindsey Graham.”

Let’s not forget that this isn’t the first time that Graham has sided with the GOP’s Invertebrate Caucus when it comes to defending the Second Amendment — he tried this sort of thing nine years ago.

Never mind that the proposed “universal” background check is the State demanding prior restraint on the exercise of a natural right — “How do we know that you’re not an axe-murdering child rapist?!” — in other words, “prove your innocence first.”

So what’s their plan to take away the knives, axes, power tools, baseball bats, and anything else that can be used as a weapon from those alleged to be inclined towards criminal violence?

Oh, that’s right, they don’t have one. That’s because their intent isn’t to stop criminal violence, or to protect people.

As the infamous Senator Howard Metzenbaum said in 1989 —

No, we’re not looking at how to control criminals . . . we’re talking about banning the AK-47 and semi-automatic guns.
— Constitution Subcommittee, 2 February, 1989

It’s interesting that in the places where the gun prohibitionist hold sway over the levers of power, it’s not only firearms that are proscibed from possession by the Great Unwashed. They also prohibit private citizens who aren’t Political Classholes or in the employ of same to own or carry pepper spray, stunguns, tasers, switchblade knives, fixed-blade knives they don’t like, nunchuks, and batons. Now in New York State and California, they’re going after body armor.

Their intent is to render you and yours totally defenseless, dependent on your cell phone and ability to dial 9-1-1, and thus dependent upon them for protection, while regulating every aspect of your life.

Because they really do know better than you do how you should live.

For the Republicans who are on board, to whatever degree, with the hoplophobes and victim disarmers in the hopes of getting favorable media coverage, all I can say is “Don’t need any support from me.”