No One Wants To Take Your Guns

Last year (Tuesday, 8 June 2021), one “MikeWrites” said that when hoplophobes and victim disarmers say that they don’t want to “take your guns” (forciby disarm you), that he isn’t in that crowd, and that he DOES want to take your guns. 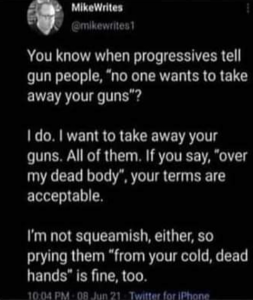 The post in question (Tuesday, 8 June 2021) has apparently been deleted.

Mr. “MikeWrites” styles himself as a writer, yet apparently won’t post his real name. It’s understandable to not use your full name when explicitly stating that you’re willing to use deadly force to deprive others of liberty and property in order to have your momentary warm fuzzy that you “made a difference” and “got something done.”

Basically, CSM Howe was an “assaulter” with the “Delta Force” (1st Special Forces, Operational Detachment Delta). His 8-to-5, Monday-to-Friday occupation was dynamic-entry and close-quarter combat — when he wasn’t training for such operations, he was either on actual ops or training others to run such ops.

In “2nd Amendment and the Kool Aid Drinkers,” CSM Howe makes the case that enforcing firearms confiscation on a large scale will be a fools’ errand at best, and a bloodbath at worst, with the disarmament crowd’s enforcers suffering significant casualties. And that’s for people who train for this sort of thing as their day job.

Chances are that when “MikeWrites” says he’s OK with uncooperative gun owners being killed en masse in the name of victim disarmament, he’s not willing to “stack up” and do the wet work himself. He’ll be wanting to schluff the getting hands dirty part off onto law enforcement.

You see, “stacking up” and getting shot at by those us unwilling to surrender liberty and property upon the demand of “MikeWrites” for his warm fuzzy of the day — well, that just might get in the way of “MikeWrites” posting pictures of his dinner plates to Twitter.

It’s also a good bet that “MikeWrites” was on board with the calls to “defund the police” in 2020, in response to the murder of George Floyd.

So he wants the people he expects to get shot at for his pet cause (victim disarmament) to do so, but without all of the weapons and ammo that they will insist on having for the task?

“MikeWrites” should also consider these facts:

In short, Mr. “MikeWrites,” it’s time for you and yours to shit or get off the pot.

Mike Blessing maintains two pages where he collects folks who do want to take your guns, on Facebook and Wimkin. He would be glad of any contributions. — Ed.