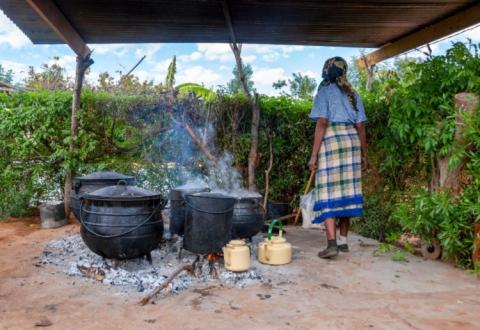 The energy and climate goals that Western governments, the United Nations, and other organizations are pushing on Africa constitute a crippling blow to its economies. As the least developed region, Africa should unequivocally prioritize economic development. One would think that amid energy poverty in Africa, Western governments and “development” institutions would prioritize energy security for African countries over energy transition.

African countries must have reliable, abundant, and cheap energy (e.g., fossil fuels) to accelerate economic development. Fossil fuels power economies and people’s lives. To deny these countries the possibility of developing with fossil fuels by imposing climate goals that the Western world itself fails to achieve is hypocritical. And malicious.

Many environmental and energy experts acknowledge the imperative to address climate change but reiterate that there is no need for apocalyptic alarmism. Bjørn Lomborg is one such expert. In his book False Alarm, he makes the case that climate panic costs trillions of dollars and hurts people in undeveloped countries disproportionately. He warns:

With 194 signatories, the 2015 Paris Agreement on climate change, the most expensive pact in human history, is likely to incur costs of some $1–$2 trillion per year by 2030. With ever more nations making promises to go carbon neutral over the next decades, these costs could escalate to tens of trillions of dollars annually in the coming years.

Any response to climate change will cost money (if addressing the problem made money, doing so wouldn’t be contentious and we’d already be doing it). If a relatively low-cost policy could fix most of the problem, that could be money well spent. However, it turns out that the Paris Agreement in its best-case scenario will achieve just one percent of what the politicians have promised (keeping temperature rises to 1.5°C (2.7°F)), and at huge cost. It is simply a bad deal for the world.

On behalf of environmentalists everywhere, I would like to formally apologize for the climate scare we created over the last 30 years. Climate change is happening. It’s just not the end of the world. It’s not even our most serious environmental problem. I may seem like a strange person to be saying all of this. I have been a climate activist for 20 years and an environmentalist for 30. But as an energy expert asked by Congress to provide objective expert testimony and invited by the Intergovernmental Panel on Climate Change (IPCC) to serve as Expert Reviewer of its next Assessment Report, I feel an obligation to apologize for how badly we environmentalists have misled the public.

In his article “The Reason Renewables Can’t Power Modern Civilization Is Because They Were Never Meant To,” Shellenberger also notes that:

Between 2000 and 2019, Germany grew renewables from 7 percent to 35 percent of its electricity. And as much of Germany’s renewable electricity comes from biomass, which scientists view as polluting and environmentally degrading, as from solar. Of the 7,700 new kilometers of transmission lines needed, only 8 percent have been built, while large-scale electricity storage remains inefficient and expensive. “A large part of the energy used is lost,” the reporters note of a much-hyped hydrogen gas project, “and the efficiency is below 40% … No viable business model can be developed from this.”

Meanwhile, the 20-year subsidies granted to wind, solar, and biogas since 2000 will start coming to an end next year. “The wind power boom is over,” Der Spiegel concludes.

All of which raises a question: if renewables can’t cheaply power Germany, one of the richest and most technologically advanced countries in the world, how could a developing nation like Kenya ever expect them to allow it to “leapfrog” fossil fuels?

Though Germany may be one of the most severely affected countries in the developed world, the energy crisis is undoubtedly global. As such, Germany, the US, China, and other countries are looking to increase coal-fired power generation to mitigate the crisis. In the US, the Biden administration chokes off domestic fossil fuel production but asks Saudi Arabia to increase its own output. Likewise, Europe is looking to African and other countries to secure access to natural gas as the continent moves away from Russian energy.

So, the developed West is looking to fossil fuels to solve its energy problems, but undeveloped Africa should transition to solar and wind?

This brings us to the hypocrisy part. Lomborg wrote:

The developed world’s response to the global energy crisis has put its hypocritical attitude toward fossil fuels on display. Wealthy countries admonish developing ones to use renewable energy. Last month the Group of Seven went so far as to announce they would no longer fund fossil-fuel development abroad. Meanwhile, Europe and the U.S. are begging Arab nations to expand oil production. Germany is reopening coal power plants, and Spain and Italy are spending big on African gas production. So many European countries have asked Botswana to mine more coal that the nation will more than double its exports.

Meanwhile, South Africa is getting money from Western countries to phase out coal while the same Western countries look to increase coal-fired electricity generation. The display of hypocrisy is blatant and will severely undermine Africa’s economic development. But though Western meddling has been harmful, if today African economies are still undeveloped and in a precarious state—over fifty years since “independence,” Africans should look at the leadership, or the lack thereof, as the ultimate culprit.

In theory, there is an energy translation happening. In reality, no such thing is taking place. Today’s global energy crisis conclusively demonstrates that the world desperately needs more, not less, fossil fuels. Consider the case of biomass, the first energy source used by humans. Despite tremendous advancements in technology and the existence of coal, oil, and natural gas, biomass is still part of today’s energy mix. This being the case, it does not make sense even to talk about phasing out fossil fuels, which meet almost 80 percent of the world’s energy needs. To think otherwise is absurd.

There is no such thing as an energy transition happening. What we do have is energy source accumulation. Humanity started with biomass and over time added coal, hydro, oil, natural gas, nuclear, wind, and solar. Today we can use these energy sources combined. Not exactly a transition.

A transition from fossil energy to wind and solar is unattainable for material, technological, and environmental reasons, among others. All existing wind and solar farms’ combined energy output does not even supply 5 percent of the world’s energy needs, yet their environmental harm is already noticeable. For example, West-funded wind farms in Kenya threaten birdlife, including endangered species. Same in the US, where wind turbines have been killing eagles and other rare birds.

Only one energy source can enable humanity to phase out coal, oil, and natural gas. And that is nuclear. Nuclear power can provide clean, reliable, abundant, and cheap energy for everyone and for the foreseeable future. So, if we are serious about net-zero emissions and environmental protection, we must embrace nuclear power. Yes, it is safe, and can be made even safer.

Africa’s Way Out of Energy Poverty

Before I was born, Angola already was mired in severe and chronic energy problems. I am gravitating toward forty years of age, and Angola is still mired in these problems.

The government controls the production and distribution of energy products and services through companies that it wholly or partially owns. Undeniably, the government has failed to provide Angolans with reliable, abundant, and cheap energy goods and services. Angola’s government is not the only African government that failed to deliver energy prosperity to its people. Energy woes are entrenched across the continent. Even in South Africa, Africa’s most developed energy state, the energy situation is going from bad to worse.

African governments should finally step aside, which is the least they could do after decades of accumulated policy failures, and let free enterprise and free trade reign in energy production and distribution. Anyone able and willing to produce, distribute, and sell energy goods and services should be free to do so. The onerous mountains of regulations and bureaucratic measures must be removed.

Politicians failed to deliver energy prosperity. Now politicians should have humility and let markets perform their economic miracle. The free market is the fastest and most effective approach to making African societies sustainably energy rich.

Climate change is real. And so are climate alarmism, ecocolonialism, and Western energy hypocrisy. Environmental and energy policies based on pseudoscience and exaggerated reports are pushing even advanced economies such as Germany and California toward energy precarity and potential blackouts. But that pales in comparison to the harm ecocolonialism can do, and in fact does, to African economies and lives. Still, however hypocritical and malicious Western regimes may be, the responsibility for energy abundance and economic development lies entirely with Africa’s decision-makers.

Reprinted from Africa Needs Conventional Fuels, Not Windmills and Solar Panels for 08/11/2022

Manuel Tacanho is founder of Afridom, a sound money based digital banking startup for Europe and Africa. He’s also an advocate of free markets and sound money for Africa’s economic development.