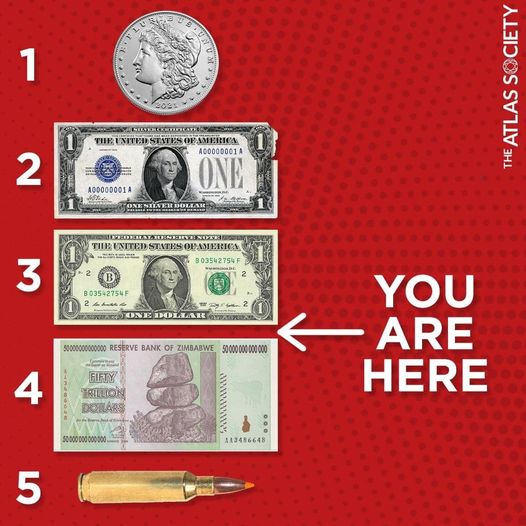 You Are Here for the dollar in stages of inflation

You are here: right between the fiat dollar and the Zimbabwean fiasco dollar. Pray God it never comes to step 5, but that’s the road we’re on. And you know what that road is paved with.

Apparently, it may soon be legal for 18 year olds to carry handguns in Texas. I had always thought it hypocritical to prohibit youngsters from carry arms for their own self-defense, but for the military to hand them weapons to use on the federal government’s enemy-du-jour. But, then, hypocrisy is what governments do.

RIP E II R: Requiescat in pace, Elizabeth Secundo Regina. The Yeoman Warders, or guards, at the Tower of London carry on their tunics an abbreviation of the name in Latin of the current monarch. In the case of Queen Elizibeth, it would be E II R. I suppose shortly it will be C III R, for Carolus Tertius Rex.

Who are your news sources today? Why? Whom do you trust? Letters or articles are welcome. — Editor.

Links! Have we got Links!

“Local law enforcement agencies from suburban Southern California to rural North Carolina have been using an obscure cellphone tracking tool, at times without search warrants, that gives them the power to follow people’s movements months back in time, according to public records and internal emails obtained by The Associated Press.” Tech tool offers police ‘mass surveillance on a budget’ Comrade O’Brien would approve.

More broadly, the Electronic Frontier Foundation’s series on Location Data Brokers: Who they are, how they work, the implications for your privacy, and what you can do to protect yourself.

And it’s not just surveillance capitalism. Here’s the company they keep. Saudi Arabians are using a widely available Google and Apple store app to report activists who speak out against the government. Some have received harsh sentences while others are self-censoring.

How the far left committed an own goal that may devastate any pretense the west has of being a scientific culture. How science became politicised But they’ve done this before. Once upon a time Marxists claimed to be “scientific socialists”, and gave us Leninism and Stalinism, and we are still paying for that mistake.

Can Oil Sanctions on Russia Work? Or, how Europe buys petroleum from one of the world’s largest net petroleum importers.

Scientists Flock to Sign World Climate Declaration and Declare “There is No Climate Emergency” Slightly incoherent (the number of signatories keeps changing) but worth looking at.

L. Neil was a fan of flying wings. An interesting might-have been.